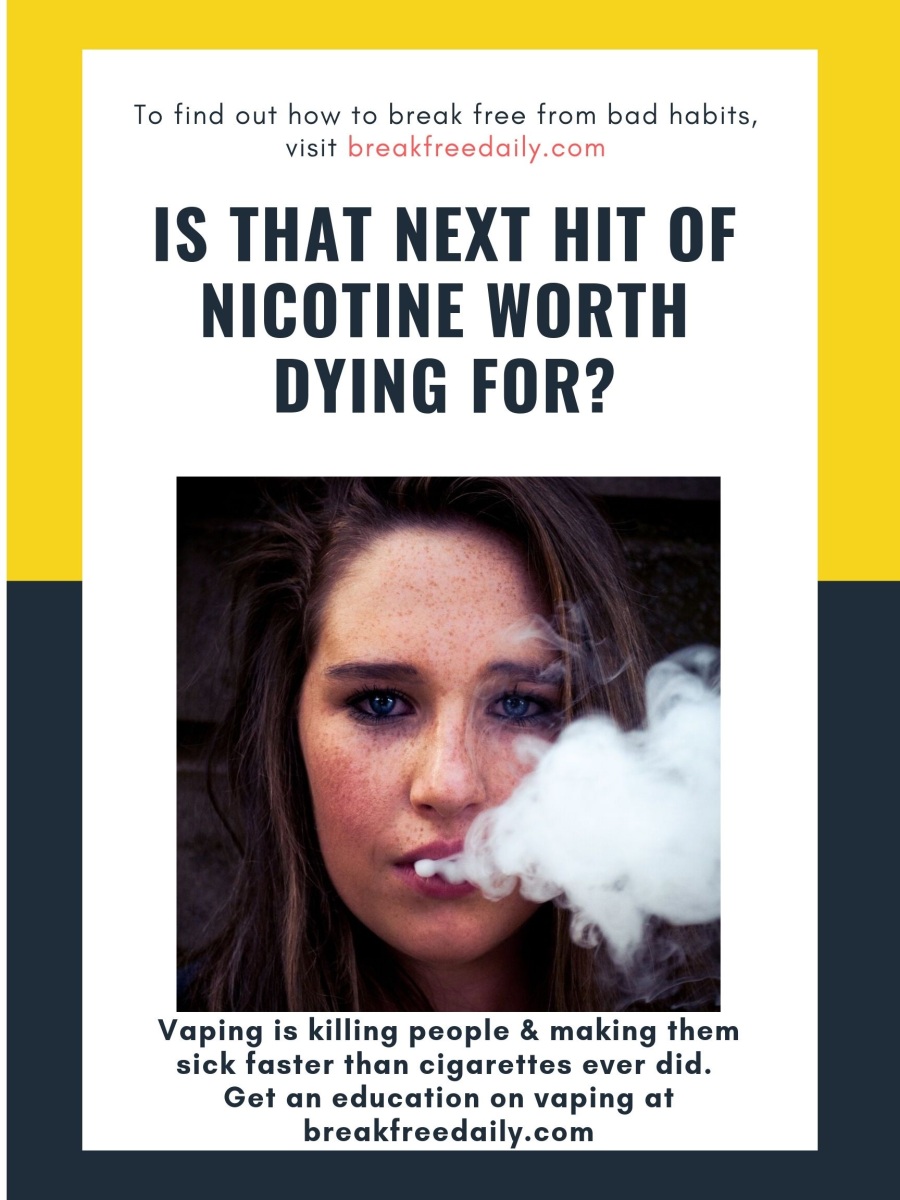 Vaping is the craze among teenagers now. They seem to think it is the cool thing to do. It’s not much different than back in our day when teens smoked. The main difference is the long & short-term effects vaping causes and the accelerated health issues as compared to smoking cigarettes.

Same principle, different method. It still contains nicotine, it still makes people sick, and even causes death, just at a much faster rate. The daily headlines are proving it doesn’t take years to make people sick, especially if used in an uncontrolled quantity.

People are ignoring the headlines that say, “Horrifying x-rays show vaping can clog your lungs with solidified oil.”

Smoking is, and has always been about fitting in with the crowd, therefore people ignore it’s risks because they think they look cool. Or, maybe they are hooked because of second-hand smoke.

In case you are one of the people ignoring the warning ads, allow me to make you aware of some of the side effects of vaping:

To this day, smoking is the leading preventable cause of death and disease. At a whopping 480,000 deaths per year, and over 16 million smoking-related diseases, it has become man’s most welcomed- enemy.

Deaths from vaping are rapidly growing. The last count I had on vaping deaths was up to 33 (it rose by ten by the time I could complete this article- according to dailymail.com), and the disease and health issues count was up to about 1,100 and counting.

People are using vape to try and quit smoking. Unfortunately, what people fail to realize, is that the effects that nicotine causes is actually accelerated by the chemicals in vape juice.

Vapor, which some people mistake for smoke, is actually aerosol. The chemicals that are heated up in vape are bad for the lungs. The oil actually solidifies in the lungs and in some cases has been known to cause blocked lungs.

The purpose of this article is to make you aware that vaping is not a good way to quit smoking. The best known way to quit smoking is to do it like I did twenty-two years ago…cold turkey. Just make up your mind that you are going to be free instead.

Don’t use a substance to break free from another substance. The health risks are too great.

Instead, discipline yourself to wake up each day and choose to be free. It’s that simple. It is your mindset that holds you back in life. You can DON’T have to have an addiction.

If it was your choice to start smoking, it can be your choice to quit. Your body has to follow what your spirit chooses. You CAN walk away from it, stop doing it, and remain just as free tomorrow, as you choose to be today.

It’s NEVER too late to change your circumstances. With a made up mind, as long as you are alive, you can change.

Look for my new book “The Devil Within” which talks about breaking free from things that hold you back in life. Scheduled to publish on December 8th of this year! Pre-order here.

This site uses Akismet to reduce spam. Learn how your comment data is processed.